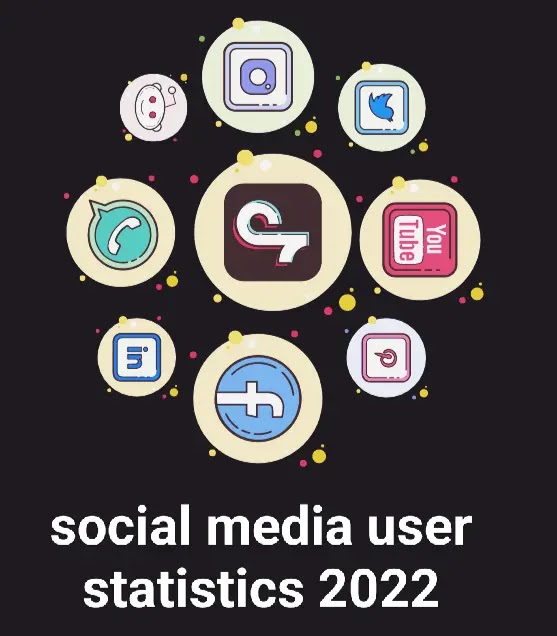 In light of the rapid pace of life and its course, and the lack of sufficient time for actual communication in our time, social media has become the ideal means of communication, whether at the social, practical or even family level.

With the advent of social media, the barriers of time and place were actually broken, so that anyone can communicate with others at any time, regardless of their distance from them.

In fact, the possibility of limitless communication with the outside world provided by social media has opened up horizons, opportunities and possibilities for all people to develop their lives at all levels. This is of course in the case of the correct use of these capabilities, as social media is a devastating scourge for those who cannot tame it.

What is social media?

social media : They are websites or applications that allow their users to communicate with each other by being under one networked roof.

Social media opens its doors for everyone to create accounts, and then gives its users the ability to create and share written, audio and visual content (videos, photos, team games, and blogging), while giving the ability to interact with what others publish.

Also, some social networking sites give their users the ability to communicate instantly through text messages, or via voice or video calls, all through the use of Internet communication technology.

In short: Social media are tools that use the power and effectiveness of the Internet and modern technology to create interactive clubs online.

The main features of social media

1. Most social networking sites are completely free, as they provide the ability to communicate and create interactive content for their users for free, and their way of making profits is based on displaying advertisements to their users.

2. Social networking sites provide advertising services to advertisers in exchange for sums of money. They receive a certain amount of money from their advertisers every time one of their users views an advertisement, or interacts with it in any way.

3. Social networking sites rely on very smart software that works towards user satisfaction, by helping him to reach friends with common characteristics, and also helping him to access content of interest.

4. Social media sites collect the largest amount of information about each user, and it monitors every activity that he performs and records it in its database.

In order to understand the nature and interests of the user and then help him achieve his goals, and on the other hand, this data is used to show appropriate advertisements to its users (the so-called targeted advertisements).

Finally, a new type of social media appeared, which specializes in quick videos, which enables users to reuse videos, and an example of this type is the Tik Tok application, which recently spread like wildfire.

On the other hand, social networking sites are all gathered under one banner, which is to give their users the ability to communicate and share with each other.

6. Social Media offers its users only a tool, as it does not produce any of the content on it, but all content of all kinds is made and produced by users.

7. Social media platforms have used and developed Web 2.0 technology is a new generation of web technology that allows Internet users themselves to create and share content among themselves.

In fact, this in one way or another enables each website owner to get something of the advantages that social media sites carry.

for example; Here at seo7u you will find the possibility to comment on this article, and you can respond to other people's comments. Forums are a glaring example to illustrate this point.

We can classify social media users in terms of the purpose of use into three types:

1. Individuals (for the purpose of communication, entertainment and seizing opportunities)

For individuals, social media is used to keep in touch with friends and family, reach out to new people to date, share interests, and access entertainment and news content.

Individuals also use social networking sites such as LinkedIn to find job opportunities, meet and follow influencers in the business world, or to reach potential clients or partners.

2. Business owners (for the purpose of marketing and profit)

For a business, social media is an indispensable tool for finding customers and making sales.

They use social media to promote, gain brand recognition, measure trends, and take advantage of direct contact with potential customers (answering their questions, creating interactive content for them and encouraging their opinions).

In fact, social media has helped save many companies' expenses, by providing opportunities to display advertisements at a fair cost and a controlled marketing budget, compared to visual media or read media.

Read also: How to make money from selling services on Facebook (comprehensive guide)

3. Governments, celebrities and politicians (for the purpose of fame, making an impact and mobilizing the masses)

Governments use it to share and inform citizens of political and economic decisions. Politicians use it to communicate with voters to promote election campaigns, or to inform the public about a particular political position.

The influence of social media was very significant during the 2016 US presidential election, especially Twitter, which served as a source of breaking news, as more than 40 million tweets related to the elections had been published as of 10 pm ET.

Also, famous singers, actors, writers, etc., use sochial Media for the purpose of communicating with their fans, and also some of them have a positive message and try to broadcast it to their audience in order to make an impact.

Read also: Ways to make money from LinkedIn (6 opportunities waiting for you in 2022)

In this part, we will review a group of the most important and famous social networking sites, with the approximate numbers of users for each of them at the end of 2021.

Of course, these statistics are approximate and approximate; As the use of social media is growing on a daily basis, every hour, minute and second.

These are the most important social networking sites and the number of monthly active users on them:

The total number of users of all social networking sites around the world is 4.33 billion users.

Note: The number of registered users of any social networking site is different from the number of active monthly, it is possible that the number of accounts on Facebook exceed 3 billion, but the monthly active members are only 2.895 billion.

According to the Pew Research Center, younger people make up the majority of social media users (about 90% of 18-29-year-olds use at least one form of social media).

They are better educated and relatively wealthier (earning more than $75,000 annually), the United States and China leading the list of earnings from social media.

The size of the advantages or negative effects of social networking sites depends largely on the method of use, which you expect on the level of awareness of individuals, and on the level of wisdom in use and unjustified excessive use.

1. It is an opportunity to reach out and meet new people.

The relations between peoples have been brought closer, through which you can communicate with individuals from other countries, learn about their culture, ideas and beliefs, and some individuals use this to learn new languages ​​by communicating with individuals who speak that language.

In the past, doing business required a lot of effort, and a lot of paper correspondence between companies, and that raised the cost of the product, as well as marketing the products and services of companies and institutions, it required a mighty effort to introduce people to the product or service, whether through advertisements in newspapers or advertisements on the roads.

However, after the emergence of modern social media, the situation has changed completely. Reaching the target customer has become less difficult.

3. It represents an opportunity to express an opinion

Social media has contributed greatly to the support of democracy around the world, through which everyone can express their opinions and relatively get rid of dictatorial governments' suppression of freedom of opinion and expression.

4. It represents an opportunity for talents

Social media has greatly contributed to supporting innovation and creativity. How many unique talents did not get an opportunity on the ground, and got this opportunity through a social networking site. YouTube is the biggest witness to this wonderful feature of social media.

5. It is a way to get news and updates

Through social networking sites, everyone can access the news from its source, and follow the course of events for anything minute by minute.

Did you know that Twitter, for example, is the first platform in the world on which users follow news, and it is superior to any other news site. Through the interaction between users on it, you will find a continuous update around the clock about any news.

Read also: How to Make Money on Facebook: 11 Easy Ways

6. It represents a way to entertain and get out of the pressures of life

7. It is an opportunity to pursue interests and awaken passion

Here are pages and groups that address almost all interests, and by subscribing to these pages or groups anyone can get a constant stream of updates on the things they are interested in.

8. It represents an opportunity to improve the career and professional field

There is social media specialized in the world of employment and business such as LinkedIn, also using social media in general and expanding the circle of knowledge and participation in professional and practical groups, this improves the chance of getting a job, and improving the professional field in general.

2. Too much time wasted

Excessive use of social media turns into a real addiction, and this makes it a pest that can eat up many hours every day.

And if not put an end to its use, it can really eat up our whole life, depriving us of the pleasure of being in reality, and practicing normal activities.

3. There are those who use it as a means to mislead

This happened on a large scale in the 2016 US presidential elections. There are many, whether institutions, governments, or even celebrities who use social networking sites to achieve malicious mistakes and mislead the public from the truth.

4. It leads to family disintegration and sometimes the destruction of social relations

Social media leads to jealousy of other people in the virtual world, as well as loneliness and distance from others and the real community.

Also, social media is considered one of the most important causes of family disintegration, as each family member has become interested only in his virtual world, without regard to his role towards his family and the people close to him and his community.

This is one of the worst disadvantages of using social media, as it makes the privacy of individuals vulnerable to hacking, and perhaps all of us have heard about the recent Facebook hacking scandal and the leakage of the data of millions of its users.

On the other hand, the nature of social media use makes people’s lives exposed to everyone, so anyone can reach you and follow you through one of your social media accounts.

Read also: how to make money from Podcast (9 different ways)

Also, to take a more advanced step in dealing with Facebook, read the topic in the link below: How to make money from Facebook Reels (Exclusive, Comprehensive Guide)

Do not forget to share the topic with your friends, and I will be very happy to share your opinion and comment on the topic in the comments below.