What is a server, its types and uses (a short and simplified guide) 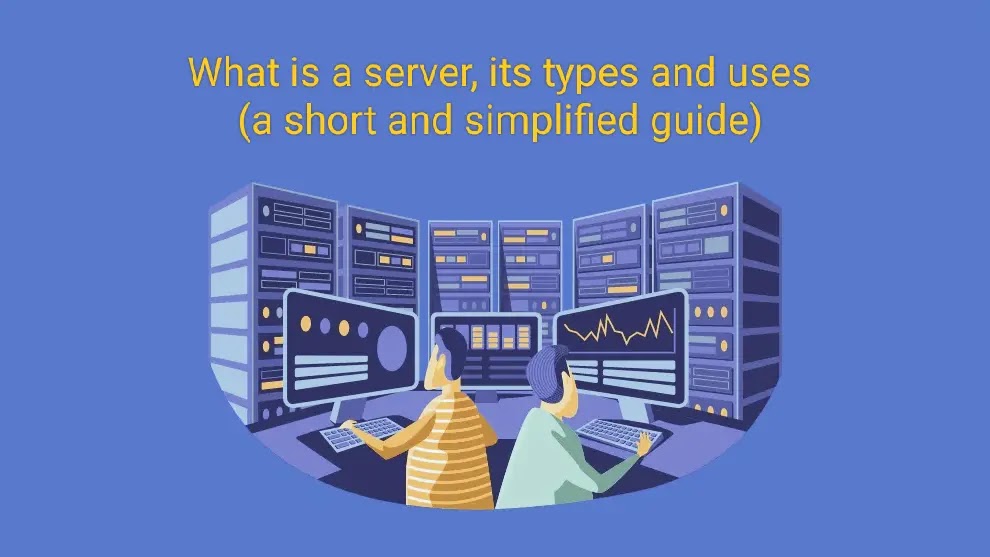 server, we've all heard this term somewhere or the other, but we probably don't know what it means.

And that despite being an essential part of the technological progress we live in, and it enters into all the electronic operations that we conduct, and it is the basis of the Internet that we cannot do without.

In this article, we will provide you with what you should know about servers, starting with their definition, different types, uses and many other important things.

What is a server?

Quite simply, a server is a computer that has some high technical specifications, which works without interruption around the clock in order to provide a service.

This service varies according to the type of server as we will know during this article, and in general we can say that these servers or servers connect computers to each other around the clock.

Servers consist of the same components as a normal computer, such as: the CPU, RAM, memory or storage device, motherboard, cooler, electricity supply, etc.

But these components are usually much more powerful than the normal computers or computers we use, allowing for more computing resources, and being able to run 24 hours a day without any problems.

How did the server appear? What is the point of his appearance?

In the past, people relied on traditional ways of exchanging data by reliant on storing it on hard disks, which you probably lived through.

And if you want to send information to another person, be it your colleague at the university or work, you must transfer this data to a Floppy disk and hand it to him personally.

Of course, these disks were susceptible to damage at any moment because they are not resistant to breaking, for example, and therefore the loss of data saved on them is possible even though it may have required you a lot of effort to finish them.

Therefore, it was necessary to find a solution to this problem, and with the beginning of the development of technology, a solution appeared that allows us to transfer information safely and as quickly as possible between users even if they are at long distances.

This solution is what we can call the peer-to-peer principle, and it helps to create a direct connection between two devices and thus exchange information faster without the need for an external medium such as hard disks, and this connection is done through an Internet cable so that the first device includes a connection network and the second as well.

And here another problem appeared before us, as one of the two devices could be locked, and therefore they could not be connected at the same time, so it was better to have a third external device on which to store data.

Thus, when the first person calls the second person's device and finds it unavailable, he can take the stored data he needs from the external device at any time.

Conclusion: the server is nothing but an external device that must work around the clock and serve us at any time we want, hence the name server.

Therefore, the server must work around the clock, otherwise all the applications, websites and technologies we use will not be able to work.

The general idea of ​​the server is the same, but the applications are multiple, which leads us to several types of servers, including:

Web Server: It is the server on which the Internet is based around the world, and on which websites are hosted.

Dedicated Server: It is the server dedicated to serving a specific entity, whether a person, company, or website, exclusively, so that this entity benefits from its full capabilities.

Cloud Server: It is a type of modern server that is similar to cloud storage and is fast and secure.

Domain Server name: It is the server responsible for storing the domain name in networks and converting it to an IP or IP address.

Virtual Privet Server: It is formed when one server is divided into several subservers and used separately.

Email Server: whose name is responsible for emails in terms of sending, receiving and storing, and some companies use it because it secures their email from hacking.

Application Server: It is the server responsible for running applications and games or storing their data.

Examples of servers in our daily life

Examples of servers in our daily life

Every day, different websites are dealt with, as these websites are hosted on a specific server, and this server is connected to the World Wide Web so that users can access this website.

In this case, the server is a Web server, and anyone with a website can buy hosting on a server, such as Bluehost hosting for example.

Also, anyone can build a server to sell hosting to site owners according to specific terms and rules.

In addition, we daily request codes from the mobile such as *100# or *999# and others, to request certain services such as inquiring about the bill, or to activate a service, and these operations are also done through a server called USSD Server.

There are thousands of other examples of how servers affect our daily lives, which include all aspects of our lives.

After we know the server and understand how the Internet works, we can say that a network can be built without a server, depending on a desktop computer, for example, depending on the goal of building the network.

For example, a restaurant manager wants to connect surveillance cameras and employee time monitoring device to a single network and connect it to his mobile phone, so there is no need to server, as there is a simpler and cheaper alternative.

The question remains, why build a network that contains a server then?

This is for several reasons, including:

Storing information and data through central hard drives located in the server.

The ability to connect the Internet to all devices connected to the network, and thus monitor usage.

The possibility of installing any program on the server, and using this program normally by the employees on their devices, thus reducing the consumption of the resources of the computers connected to the network.

Reduce expenses, for example, you can purchase one printer that can be used by all employees.

Protect the network from external attacks and viruses.

Backup of company or facility information and data.

Determine the right server specifications for you

And as long as we talk about servers, we will also help you determine the capabilities of the appropriate server for you, which depends on many things and factors.

For example, if you are going to create a server for a company, you will certainly take into account the nature of the company, the type of services the company provides, the number of current employees in the company, and whether there are branches of the company in other cities or countries or not.

In addition to many other factors that should always be considered when building any network that contains a server, but when buying a server, you should pay attention to the following specifications:

The server's CPU processor, where you should pay attention to its speed and compare it to what the company is doing on the network.

The specifications of the feeder for the server, is it suitable for the energy the server consumes or not.

The cooling units in the server, and it is one of the important parts to maintain a low temperature for the internal components of the server, as the servers work around the clock.

The operating system that the server should run on, and the most famous systems: Linux and Windows.

Moreover, the server must be placed in a special room, in which a set of conditions are met, in order for the server to operate at the highest possible efficiency.

The server must also be placed in a place designated for it called the server room, due to its different operating conditions than any other device, and the server rooms must have:

Close it to the main entrance to the company if possible, in order to save the server in the event of a fire, for example.

Maintain a temperature of 22 ° C in the room, this can be achieved by using a cooling conditioner.

Raising the server and its connected devices off the ground using dedicated booths.

The ceiling height of the room must be at least three meters.

The room does not have windows.

There is a fixed telephone in the room.

There are also specifications related to the structure of the room, and a specialized person can be used to fully fulfill these conditions, and to obtain the best performance of the server.

The server is a computer, but with greater computing capabilities, and it can work 24 hours a day in order to perform the task it does.

2. What is the importance of the server?

3. Why does the server have to run constantly?

The server must work 24 hours a day, 7 days a week, and this is because it is the basis of the networks we use in many aspects of our lives.

For example, imagine that you cannot access the Internet, for example, after 8:00 pm because servers are taking a vacation, which is disastrous, right?, so servers in various companies and sectors have to work continuously to serve customers.

4. What are the types of servers?

There are countless types of servers, but the main ones are:

5. What is the difference between a server and a regular computer?

In fact, in terms of working principle, there is no difference, but there is a difference in terms of specifications of internal components and operating conditions.

6. What is the difference between a server and a data center?

Server is the basis of the Internet as it is the basis for most of the technologies that we use daily in various aspects of our lives.

A server is a computer that has the same components, but is usually more sophisticated and is able to run around the clock non-stop.

There are many types of servers that we use on a daily basis, which are consistent in the idea of ​​their work and differ in their functions and tasks.

And so our article is over. I hope you liked it. If you have any questions or inquiries, you can share them with us in the comments box and we will respond to you as soon as possible.